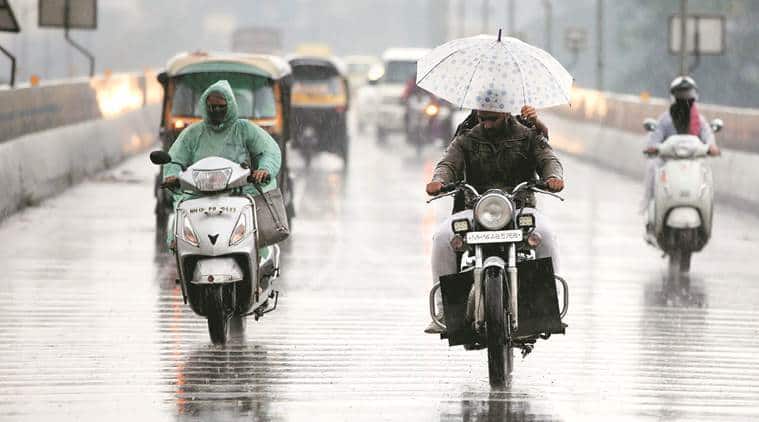 Last year, Mumbai had witnessed its most delayed onset in the last 45 years after the southwest monsoon was declared over the city on June 25.

On June 14, the India Meteorological Department (IMD) declared the onset of the southwest monsoon over Mumbai. However, on Sunday – three days later – the city is yet to receive widespread rainfall.

While some parts in western suburbs recorded short but intense spells of rain on Monday, on Tuesday, the city recorded 0.8 mm of rain, in the 12 hours ending at 5:30 pm. On Wednesday, trace rainfall (which cannot be measured by a rain gauge) was recorded.

The IMD has called this a “soft onset” of monsoon, one without heavy rain over the region. The southwest monsoon onset marks the beginning of the four-month – June to September – monsoon season over India, which brings over 70 per cent of the country’s annual rainfall. The onset for India is announced when certain criteria is fulfilled anytime after May 10. If at least 60 per cent of the 14 designated meteorological stations in Kerala and Lakshadweep report at least 2.5 mm of rain for two consecutive days after May 10, along with a few other conditions relating to wind and temperature, the onset of monsoon is said to have taken place.

The northward progression of monsoon, after reaching the Kerala coast, depends on many local factors, including the creation of low pressure areas, rainfall, wind speed and direction as well as type of cloud. The NLM is the north-most limit of monsoon up to which it has advanced on any given day. The onset in Maharashtra was declared based on the progression of the monsoon system and factors such as rainfall criteria and monsoon (westerly) winds at middle-troposphere level. The criteria is not as stringent as it is for Kerala.

As per the new onset dates classified by the IMD, the normal date for monsoon to cover Maharashtra is between June 10 and June 15. Monsoon in Mumbai arrived three days late from its normal onset date of June 11. However, the monsoon progression will not likely to be called delayed as a standard deviation of five days is considered by the IMD.

The IMD has maintained that several criteria for declaration of onset in Mumbai, including 2.5 mm rain in two days, among others. “The city didn’t receive much expected rain after the onset of monsoon. It was a soft onset,” said K S Hosalikar, Deputy Director General, IMD Mumbai.

Pre-monsoon showers are characterised by squally winds — they come with sudden, sharp winds that last for a long time and occur during rainfall. The rains are sharp and intense but go away after one downpour. The showers are usually patchy and mostly arrive post afternoon on days characterised by sunny mornings — a pattern seen in Mumbai for the last three days. On the other hand, the southwest monsoon is not patchy, does not follow any timing and lasts more than a downpour.

For all the latest Mumbai News, download Indian Express App.

NRI businessman from Kerala jumps to death in UAE

Mentalhood Teaser Out, Karisma Kapoor Shares the ‘Madness in a Mom’s Life’

COVID-19: Why & How Does The Coronavirus Spread Quickly & Attacks Human Cells Easily?

How to Watch Live Stream, Expected Price and More

How to Watch Live Stream, Expected Price and More